An INDYCAR car will enter the pit box with the two outside tire changers all ready across the wall and on their marks. Within 0.5 seconds the other crew members will be in position, the car will be up, and the fuel will load. Within two seconds, the tires are off, and within five seconds, new tires are on. If there is no problem with the fuel line, within seven seconds, the fuel is loaded and in the next second, the car is off. It is a choreographed and well-rehearsed moment for each pit crew. They celebrate every textbook stop, and breakdown every problem. There is no group of people in INDYCAR I like to chat with more than the pit crew. Most of them have served on multiple teams, all of them have a loyalty to their current driver, and they all have great attitudes. It seems that 2019 is a wild year for pit crews. So far we’ve had multiple fires in pit lanes, drivers clipping crewmembers, and whatever we’re going to call Jordan King’s incident at the Indianapolis 500. 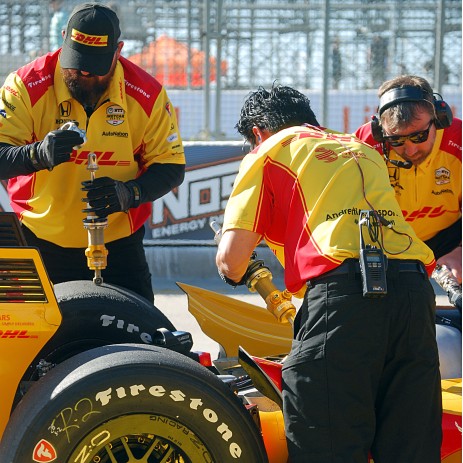 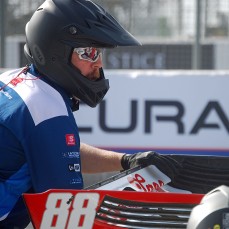 INDYCAR has many safety measures in place to protect the crew and deter injuries. Two of the most important measures are keeping the speeds in pit lane down, and limiting the number of people over the wall. At nearly all INDYCAR races, the limit is 60 miles per hour; it was changed at Texas Motor Speedway where the series instituted a two-level pit speed. While within the area of pit lane, the speed was 60 mph. Past an initial blending line drivers could increase to 90 miles per hour. Additionally, it is very well monitored how many people go ‘over the wall’ during a pit stop (or any part of the race). Only six members of the team can be on an active pit lane during a pit stop. All team members involved with the pit stops are also required, by INDYCAR rule, to wear fire-resistant clothing, shoes, gloves, and the all-important helmet.

Pit lane is a dangerous place, and to help minimize that danger, members of the safety team are positioned throughout the area. In fact, a pit lane official watches each pit box. Their only job is to watch that one box and make sure no rule violations happen. Violate a rule and punishments range from monetary fines, a drive-through, a stop and go, and reordering to the back of the field. It seems though; this is not enough to avoid potentially life-threatening situations. This year when Jordan King clipped one of his pit crew members, who was on the outside of the pit and got knocked into the active pit lane, it seemed to take too long for any safety crew to reach him. For that incident, King received a drive-thru penalty. Just one lap earlier Will Power clipped one of his crewmembers and was reordered to the back of the pack. This past weekend at Texas Motor Speedway, Takuma Sato seemed to enter his pit box too fast, locked up his wheels, and hit his crewmember (it wasn’t a clip, it was a hit). Sato received a stop and go penalty for that incident.

Now granted, except for having every crewmember wait behind the wall, come over when the car is stopped, execute a pit stop, come back over the wall, and then the car leave – incidents will happen. Even with that scenario you still have other cars entering and exiting their pit boxes. So we can’t eliminate incidents, but we can still continue to increase safety and continue to deter them. For starters, any pit lane incident that involves hitting/clipping personnel is a stop and hold each and every violation for the same amount of time. It is one of the harsher penalties at the disposal of INDYCAR officials, but it’s warranted. Think for a minute about the position of crewmembers during a pit stop. The two on the outside are already on an active pit lane, and at times have their backs completely to other cars. Additionally, if a car has struck a crewmember, even if that individual is on the ground, pit lane needs to be closed. Yes, it’ll cause tremendous heartburn to everyone involved, but I think that’s safety procedure number one. If someone is down on pit lane, it gets shut down.

The guys and gals, who work on pit crews are absolutely dedicated to their craft. A lot of them train together when not at races. They can tell you details about their car, their driver, and each race. They perform some of the most important work during a race. We have to have a very frank conversation about increasing their safety. This year has already shown something needs to be added or increased. Also knowing a lot of these pit crewmembers, a lot of them will not want to have this discussion. They don’t want to see ‘their driver’ punished any more than necessary. That’s why they’re all awesome.