It’s hard to write about another race while in the midst of Indy-pression (though, this year I’m not as depressed because I’m looking forward to a lot more races in person). But unlike the drivers, I too can’t take a weekend off and so onward to the Motor City, the Dual in Detroit, Penske’s Playground, the Island of Controversy!

In 2018 Rossi put on a show both days. The first race was another show of just how good Rossi is as a driver. We saw him faint out Wickens to pass him, and it was quite a tight pass! Then after complaining that Marco Andretti was holding him up, he played a game of chicken with Marco, and Rossi won coming in third at that race. He then killed it during a soggy qualification for the second race (anyone else love when they use the phrase “throwing the car around”?) to win the pole, and looked really great 3/4ths of that race. Then he and Ryan Hunter-Reay got into cat and mouse, and Rossi lost.

It was also a weekend for veteran drivers. Scott Dixon winning the first race and moving himself up the “overall wins” now tied with Michael Andretti with 42 race wins. A.J. Foyt sits atop that chart with approximately 62 wins, and as I teased my father on Saturday…Dixon could beat that. He shows no sign of stopping. Then another veteran, and sometimes overlooked unless you want to buy a turkey, RHR clutched the second race. Then jumped in a fountain. It broke a streak for RHR that extended to 2014 at Pocono. Veterans decided to remind the rookies that they still have game. 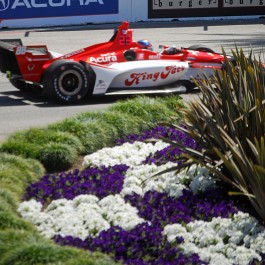 The qualifying format always needs to be discussed. It’s a unique race weekend with the double-header. So qualifying is also changed. The field is split into two groups, and each group gets twelve minutes. Whoever lays down the fastest lap between the two sessions gets the pole, and everyone else is slotted in odds and even. It makes sense…sort of. It helps drivers manage tires as they’re only their for one qualifying session per race.

For Race 1, the drivers all qualified on dry track conditions, only to have the race delayed by over an hour for severe weather. Yes summers in the Midwest (even the upper Midwest) are feisty. Qualifying was extremely exciting! The group with Dixon, Rossi, Sato and Herta put on a bit of a speed show towards the end. Ultimately, the pole belonged to Alexander Rossi.

By the time the race started, INDYCAR had made the decision to switch from seventy laps to seventy-five minutes. The track was still very damp and everyone started out on wets. The race didn’t even start before we had the first caution with Veach spinning his car. It just kept going from there, it felt like more of the race was ran under yellow then under green. Lap 1 had a caution when Matheus Leist spun his car. Then we had a caution for RHR in Turn 7, another one for Ed Jones in Turn 7, Dixon in Turn 6, and finally, the last caution was Leist in the barrier in Turn 7.

Outside of cautions, drivers made some gambles. Will Power’s team gambled on releasing him from his pit stop to try and beat Rossi out of Pit Lane…but the right front tire wasn’t secured and he three-wheeled it down pit lane. Marco Andretti does take the award for biggest gamble of the race. He was the very first driver to put on slicks, and the three laps from his onboard camera are responsible for multiple yells and gasps in the bar. The second gamble they took was that a yellow would happen and he’d leapfrog ahead. A yellow did happen, but the pits opened earlier then Marco’s team thought and got beat off the line by quite a few people. I’m only going to say this one (jk I’m going to continue to say this): if your strategy is based upon a yellow happening – find a new strategy.

The winner of this race: Josef Newgarden. A close second for Colton Herta and Zach Veach’s great back and forth. The losers: those of us who thought maybe this race would be exciting. 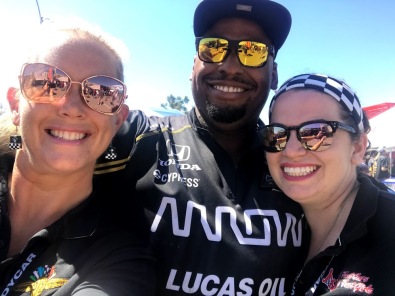 Qualifying again proved to be more exciting than the race! Group A had no problems, and Rossi put up the quickest time. Group B came out to a tire barrier leaking, which delayed them for approximately fifty minutes. When they got to running, Josef Newgarden put up the fastest time and after winning the race the previous day, he clenched the pole on the second day.

Then the race just brought out surprise after surprise. Lap 1 was the roughest Lap 1 Detroit has ever seen. We had Will Power going on a spree hitting Patricio O’Ward who collected Tony Kanaan and Simon Pagenaud. Power wasn’t done, he went on to bump Felix Rosenqvist and his own teammate Simon Pagenaud. Four laps later, the track said “whoa” and Power stalled on the backstretch. Pagenaud’s team ultimately got the car back together and he went back out on the track. Why some people asked? BECAUSE POINTS.

Approximately ten laps later Sebastian Bourdais found himself in another improbable race incident. It appeared that Spencer Pigot had decided he was going into the pits. He started across the track and went into Bourdais. Bourdais rode up the back of Pigot’s car and lost his nose cone. While the Full Course Yellow happened, Bourdais went into the pits where his team removed the nose cone. Bourdais then took a lap WITHOUT A NOSE CONE. It kept him on the lead lap. They put the front wink back on, and off Sebastian went.

Oh the race wasn’t done. James Hinchcliffe was in the pits and put on new tires, he exited the pits just as the race leaders (Newgarden and Rossi) were at the blend line. Now the veteran driver decided that was the time, on cold tires, to go clear across the track and mix it up with fast drivers on good tires. Shit didn’t end well. The three attempted to get through a turn, after Hinch cut off Newgarden’s nose. Newgarden spun collecting Hinch and Rossi. Hinch and Newgarden were done, but Rossi reversed his car and got tf out of that situation. Newgarden’s car was brought back to the pit where they did get it back out on the track (those all important points!). Hinch’s car later died around Turn 6. Newgarden was a class act in his post-accident interview…Hinchcliffe was not.

The final moment that gave me no unending rage (other than how quickly those red tires bit it) was after Felix Rosenqvist hit the wall and ended in a grass patch – Race Control flew the red flag. Now…we all know why. They wanted a dramatic five lap shoot out instead of a few laps on yellow and a few on red. Rosenqvist was cleaned up quickly, and at least one crew over the radio wasn’t sure why a red was thrown. But they went red. One lap yellow, and then five laps green.

No shoot out happened.

What the shit Race Control.

Also super congratulations to Marcus Ericsson! Rookie got a podium with a second place finish and was sandwiched in a train of INDYCAR Champions and Indianapolis 500 winners. I like the kid. I also know a few people in and around that team and they are super cool. They deserved that win and I hope they celebrated!!

Photo by Justin McAfee on Unsplash