Long Beach, a temporary street circuit on the shores of the Pacific Ocean. It’s one of the most celebrated races on the current schedule. Besides being beautifully located on the water, the track offers two strong areas of passing (T1 and T9). Areas of tight turns (the Fountain Turn and T11). As well as a super long pit lane, which was the site of controversy in 2016 as well as some issues last year.

Rossi rolled off the track in an incredible car! He was third in the first practice session, then led session two and session three. He took the pole by three-tenths of a second. I’m not completely unconvinced he wasn’t playing mind games at the end of qualification. In his qualifying group and the group of twelve, he was fast from the start. Passing all the cars in pit lane before him. Then for the Fast Six, he sat. He ran only two laps in Fast Six ( everyone else ran four except for Newgarden who hit the wall and Graham Rahal).

Rossi’s car handled the turns at Long Beach better the Power and could pull away in the turns and stay ahead in the straight away. Great car. Great driver. Great race!

Sebastian Bourdais had a fantastic race but shitty luck. His pass on the outside of Dixon and then the inside of Leist at the same corner of the track will go down as the coolest thing I’ve seen in quite some time. Sure, Race Control gave him a penalty (he did cross the pit line), but Bad-Ass Bourdais took the position back within the next lap. He then went into Pit Lane just as an FCY happened closing the pit, so he had a drive-thru penalty. Finally, and as everyone was watching the nosecam on his car, Jordan King clipped him trying to pass Hinch (who was a few cars back) and spun him out.

The practice sessions were dominated by Hondas. In the very first session, seven out of the top ten were Honda teams (and the final three were Penske cars). Ryan Hunter-Reay (Andretti Autosport) set on top of the charts for the first session with a lap time of 1:07.9335. Third-fastest went to already outstanding Rookie Colton Herta (Harding Steinbrenner Racing). Herta wasn’t the only rookie, Felix Rosenqvist (Arrow Schmidt Peterson) also snuck into the top ten coming in seventh. He was just before the three Penske Cars. The second practice session continued to show Honda dominance with the engine manufacturer holding seven out of the ten spots. Scott Dixon (Chip Ganassi Racing) held the top spot with a lap time of 1:07.7940 on the Firestone Alternate tires. Rosenqvist leapfrogged his fellow Rookies to come in third quickest during the session. Fellow rookie Patricio O’Ward (Carlin Racing) landed fifth quickest in the session. The final practice session had a slighter dominance by Honda. However, Alexander Rossi (Andretti Autosport) popped to the top of the charts with a lap time of 1:07.0568 on Firestone Primary tires.

It was after the third practice session, and before qualifications where a certain back-to-back Long Beach Champ lost the key to his scooter. We had found a fantastic spot to post up during practice and quals near the pit. It turns out the drivers also like that spot to park their scooters there. Somehow, Rossi had placed his key in its usual spot, and the key moved. As an introvert, it was mortifying as people were trying to help…sort of…or in his face. We respectfully stayed sitting on the bench and watched the whole ordeal. It may be a good luck thing for him. That or almost hitting me with his scooter twice (ya’ll need to learn how to yell “on your left” like we runners do).

Plagued by red flags. We discussed this on our latest episode (which you can listen to on Wednesday, if you’re not subscribed you can do so by visiting our SUBSCRIBE page). It feels like this season is just all red flags all the time during qualifications. It feels like there’s been a higher number than last year, but we’ve also only had street/road courses so far. Last year there was Phoenix to break up the road courses. We had two red flags during the session. In Round 1 Group 1 Tony Kanaan hit the wall causing the red flag. He failed to advance, and the incident also caused both Arrow Schmidt Peterson Motorsport cars to not advance either. In Round 2 it was rookie Felix Rosenqvist who brought out the red flag. I recently wrote about the red flags in qualifying, that can be read HERE.

Qualifying though belonged to Alexander Rossi. Who posted a lap time of 1:06.4811, which at the time was the fastest lap time of the race weekend. Last year the strategy was an out lap and a qualifying lap for the Firestone Fast Six. This year, the team changed up the strategy and went with two different sets of the Firestone Alternate Tires.

Pre-race another media member asked me who I thought was going to win. Without hesitation – Rossi. He had been quick all weekend, he had the pole, and he does extremely well if he starts from the pole. It was a banner race for Rossi. He led eighty out of eighty-five laps. By the time the race ended he had a twenty-second lead over second place Josef Newgarden (Team Penske). It was a flawless race. During the first lap, Dixon attempted a pass, but Rossi kept the door shut. Dixon attempted the same move during the restart, and again the door was shut. It’s hard to write about a drive that was perfection, but there’s nothing else to say except it was!

Who else had good races?

We were treated to great racing between spots three through seven. Simon Pagenaud (Team Penske) and Will Power (Team Penske) both battled with each other throughout the course. I do enjoy a good teammate on teammate battle. Towards the end of the race, Dixon, Hunter-Reay, and Graham Rahal (Rahal Letterman Lanigan Racing) all were battling for the final podium spot. Hunter-Reay ended the race in emergency mode and gave up positions to Dixon. Then, of course, the controversial blocking call between Rahal and Dixon. So everyone is upset because Race Control called Rahal for blocking and, as it is with blocking, you give up the spot. In any other time of the race, it wouldn’t be as controversial, but on the last lap, that means Rahal gave up a third-place finish for fourth. Did he block? It appeared there was at least an attempt, and even more, Rahal came out and said he did. He just felt there are inconsistencies within Race Control. I’ve stated that fact before, but in this case, it appears both race stewards unanimous with the decision.

Both James Hinchcliffe (Arrow Schmidt Peterson Motorsports) and Matheius Leist (A.J. Foyt Racing) had the types of race where they keep themselves out of trouble and gain spots. Leist was involved in the first lap contact with Spencer Pigot (Ed Carpenter Racing), but after that, he gained five positions to end up in fifteenth place. Hinchcliffe gained six spots to end the race in ninth place. 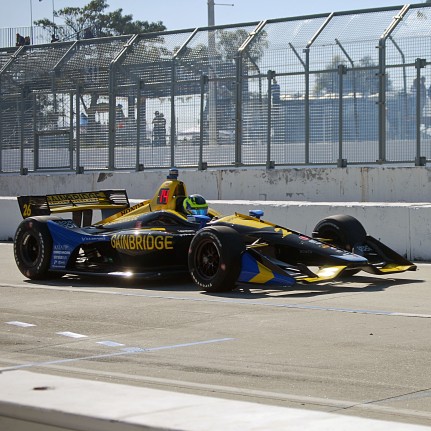 Who had a bad race?

Zach Veach (Andretti Autosport) isn’t having a good season so far. I have no clue what is going on, but he’s having issues with his set up at tracks. He couldn’t get things right this race. There was a fuel miscalculation and it just kept going downhill. I heard him drop F-bombs at least four different times during the race. I’m hoping his luck turns around. The team rolls out quick for the 500.

Colton Herta also had just horrible luck. The beginning part of the race showed flashes of a brilliant battle between Herta and O’Ward. We’ve discussed many forced narratives (including one which I wrote about HERE), but this is a good narrative. Two rookies, some history between them, and two great racers. Maybe someone in INDYCAR or NBC would like to use that idea. After Herta quickly got around O’Ward, he later had a pit stop issue where his team didn’t get the air gun moved in time. Herta (wisely) to avoid a penalty stopped the car, which caused it to stall. He later went on to smack the wall on Lap 50. The damage included a bent suspension, and his day was done.

Lap 1 involved some cars getting tangled up in the Fountain turn. There was the contact between Spencer Pigot (Ed Carpenter Racing) and Matheius Leist. There also was a mix up between Marcus Ericsson (Arrow Schmidt Peterson Motorsport) and Jack Harvey (Meyer Shank Racing). Harvey ended up on the fountain itself. Both cars were able to get back into the race but failed to finish on the lead lap.

I’ll reserve the final note for a driver that seems to be just not doing well. I speak with respect when I mention Tony Kanaan (A.J. Foyt Racing) because he’s a true statesman of this sport. Last weekend at Barber was not great, and this race didn’t fair better for him. He had the issue during qualifications, which apparently bent part of his steering wheel. It caused him to spend some time with INDYCAR medical both after qualifications and before the race.

Other Thoughts from the Weekend

There’s been a call for ‘stage racing’ (for those who don’t know, our NASCAR brethren will throw a yellow flag after a set amount of yellows and then go through a restart). Since Rossi had, in the words of Bourdais, an “ass-whipping party”, people think the race was boring. Therefore, their solution is to force restarts. In my humblest of opinions, we cannot penalize the series because a driver during ONE race has everything tuned perfectly. There was a lot of activity throughout the field in this race. I watched the race live, and on the NBC Gold package after the race. The television coverage did, at multiple times, have long shots of the back of Rossi’s drive without any cars behind him. I’m a huge Rossi fan and even that is boring. At one point the television crew went through the Top 10 of the field and discussed various aspects of their race. That was interesting; perhaps they should endeavor to focus on that, including at the beginning of the race.

Aside from that, I will leave you with the following tips. Keep in mind this was my first time at the race: 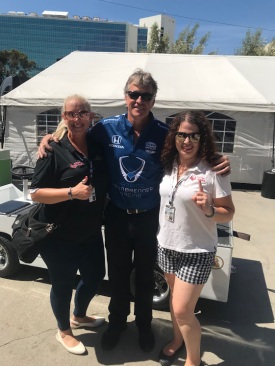 If you want to receive emails only on Monday letting you know what blogs have been posted – sign up to the mailing list: http://eepurl.com/dOoc9n
It’s nearly May, things get going quickly and you’ll want to keep abreast of our podcast. You can subscribe by visiting our subscribe page: www.fastcarsfastgirls.com/subscribe