Warm Up the Tires

It’s a full field for the Indianapolis 500 with James Davisson announcing a ride with DCR and Belardi. There may be 37 cars when you think about the Foyt third car, the MSR second car, Juncos, and SPM having an additional car. Also during the 500 – Jay Frye indicated there would be two big announcements. One is pretty surely going to be the other engine manufacturer.

Also good on Pato O’Ward for a thirteen-race ride with Carlin for 2019.

As far as clean up from St. Petersburg: Ed broke his hand near his pinky finger, and the tv numbers looked great!

The series is at the Circuit of the Americas, a permanent road course outside of Austin. It’s a twenty-turn, 3.4 mile course. It has an elevation change of 133 feet. INDYCAR hasn’t been here before, but Formula 1 has raced there since 2012. We’re super excited for a new track with great turns and elevation changes.

We made our picks and our drinking game: 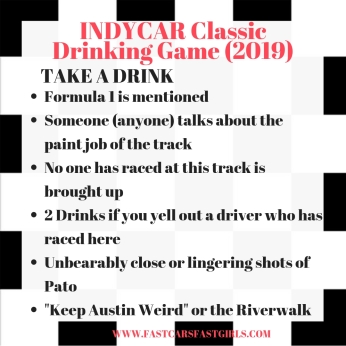 Woman Of The Week – Rosemary Smith

Rosemary Smith is our Woman of the Week, and Molly recently wrote a whole blog about her. You can read that HERE.

Shit We Didn’t Make Up – F1 and INDYCAR Overlap

Just a sampling of the overlap between INDYCAR and Formula 1.

Drivers (drivers who did more than just the 500)