I don’t think anyone over at Schmidt Peterson Motorsport wanted the year they had. While every single person is grateful Robert Wickens survived the Pocono accident, and he continues to amaze everyone with his rehabilitation, no one wanted or asked for it. 2018 has been one of those years that a team will use as a line in the sand. If there is any team that can come back from such adversity: it’s Schmidt Peterson Motorsport. 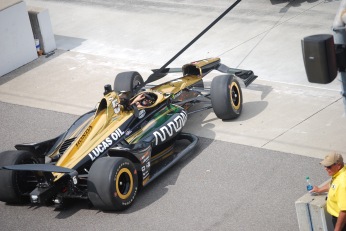 Any driver that find themselves behind James Hinchcliffe in points (10th) should take a long hard look at their season and try and figure out what happened. He missed a double points race (we’re already talking bumping for 2019 a look back at 2018 can be found HERE). That doesn’t mean he gets a few points, he got zero points from the Indianapolis 500. Zero points from a double points race and he still ended the season in tenth place. It’s been a weird season for Hinchcliffe. He did get one first place (Iowa) and another podium finish. His overall finishes were close to even, with seven being outside of a top-ten finish and nine being in the top ten.

The final races of the season weren’t great for Hinch (15th, 22nd, and 15th), that may be attributed to the issues that affected his hands following the crash during the ABC Supply 500 at Pocono Raceway in August. For certain, next season I suspect the #5 car will do what is necessary to make sure they race in the Indianapolis 500. Last time Hinch missed the 500 he came back and grabbed the pole – maybe we’ll see that happen again.

The question surrounding Robert Wickens’ rookie season with INDYCAR is: what if? Before the crash during the ABC Supply 500 at Pocono Raceway in August, Wickens had already driven himself into notoriety. The story of Wickens started at the Grand Prix of St. Petersburg. In his first INDYCAR race, Wickens clenched the pole. I remember sitting on the track, eyes wide looking at the screen: it was amazing. His statistics are nothing but spectacular. He had one pole, four podiums, and a top 10 finish at his first Indianapolis 500. We joked, but he was the non-rookie Rookie. Coming over from DTM, did it truly prepare him for INDYCAR? I think it didn’t. Some of his reactionary comments, especially after the Indianapolis 500, indicated the series was challenging for him.

The series ends with Wickens as the Rookie of the Year and in eleventh placed (in a sort of unexpected twist tied with his BFF James Hinchcliffe). But what if? The crash took Wickens out of the rest of the season. He missed the final three races, including the double points at Sonoma. I think, had he raced the final three races, Wickens would have cracked the Top 5. No one knows what his future holds, but he is a smart and very strong individual.

This upcoming season the team is adding Marcus Ericsson as the driver for the #7 car, and full-time partner for Hinchcliffe. Prior to joining the team, Marcus drove for Sauber’s Formula 1 team from 2015 to 2018. The team also has Arrow coming on board as title sponsor for the team. It’s an increase in financial resources for the team: and it can only mean good things.

If you want to receive emails only on Monday letting you know what blogs have been posted – sign up to the mailing list: http://eepurl.com/dOoc9n
Also, I guarantee you we’ll be talking this team during episodes of our podcast. You can subscribe by visiting our subscribe page: www.fastcarsfastgirls.com/subscribe