It’s here – the kick off to the 2019 Racing season. Those of us INDYCAR fans have been waiting since mid-September. We still have a few months to go till our season officially starts, but it just feels closer now. Plus, at the Rolex 24, there are numerous INDYCAR drivers attempting the race.

The Rolex 24 started way back in 1962 and was, at the time a 3-hour race. They did not extend the race to twenty-four hours until 1966. It’s been twenty-four hours since then, except for 1972 (6-hours) and 1974 (cancelled) during the energy crisis. Endurance races are proving grounds for the car manufactures. We all know the names: Acura, Cadillac, Mazda, Nissan, BMW, Corvette, Ferrari, Ford, Porsche, Audi, Lamborghini, Lexus, and Mercedes. The whole raceway is a celebration of cars with various manufacturers having their own ‘paddock’ where car owners can show off.

Mike Hull, during our shop tour of Chip Ganassi Racing, indicated that streetcars we drive could beat the GT cars. This is due to the specific regulations of the governing body. At the Rolex classifications of cars will race. There the Daytona Prototype International (DPi), designed and engineered specifically for the race at Daytona. The other prototype in the mix is the Le Mans Prototype 2 (LMP2), which is similar to the DPi but can race at the 24 Hours of Le Mans. The second set of car classification is the Grand Touring cars. These cars are the ones that the standard manufacturers are testing upcoming advancements to the streetcars. Within this classification, there are two types of cars: the GT Le Mans (GTLM), which uses the Le Mans specifications, and the GT Daytona (GTD), governed by specific Fédération Internationale de l’Automobile requirements. IMSA does a fantastic breakdown of the classes including pictures, I’d recommend you take a peep over here.

Since this race is at the beginning of everyone’s season, it draws in names from every type of racing discipline. Some of the more famous names include AJ Foyt, Dan Gurney (who won the inaugural race), Lloyd Ruby (who won the first twenty-four-hour race), Al Unser Jr., Mario Andretti, and Paul Newman. As this is an INDYCAR focused blog/podcast some names that are familiar are: Scott Sharp, Christian Fittipaldi, Charlie Kimball, Justin Wilson, Dan Wheldon, and Dario Franchitti.

Last year the race was won by the #5 Mustang Sampling Racing Cadillac that also broke the distance record by going 808 laps for a total 2, 876.48 miles. The GTLM class was won by the Ford Chip Ganassi team of Scott Dixon, Ryan Briscoe and, Richard Westbroke. You can read my review of last year’s race HERE and listen to our Race Report from the Road HERE

The 2019 Rolex 24 came out swinging – this race was not going to disappoint. We had been getting excited about it since our December interview with Mike Hull (listen here) and our interview with Team Penske spotter Mike Ford (listen here). It’s once again pulled in star power with Fernando Alonso making his second attempt at the race in the DPi team of Konica Minolta Cadillac. Also, former everything racer Alex Zanardi will be in a 4-person team for a GRLM with BMW Team RLL and watching his preparation has been nothing short of inspiring.

Closer to home for me is always keeping track of all the INDYCAR drivers attempting the race. Penske has two entries (DPi cars #6 and #7), and Juncos will be making their maiden attempt at the race in DPi #50. Plus you know my favorite driver Alexander Rossi is going to be in the mix this year joining Ricky Taylor, and Helio Castroneves in the Penske #7.

Another car I’ll be watching is the #57 GTD Heinricher Racing with Meyer Shank Racing. This is the all-female team of Katherine Legge, Ana Beatriz, Simona De Silvestro, and Christina Nielsen. The team is spearheaded by Jackie Heinricher who I wrote about recently (you can read that HERE).

The final storyline heading into the race is us. After finding out that Roger Penske stayed up for twenty-four hours in 2018, we decided we should do that too. Also, we couldn’t sleep through the race anyway because those Cadillacs are deep rumbling. Everything was captured on our social media – so take a peep over there. We actually categorized our Instagram to be easier to find.

In 2019 the race decided to get flagged twice (a new record) and was cut short because of rain (which had never happened). There were seventeen yellow flags. It started raining at 4am and did not stop until well after the podium ceremonies. It made for beautiful pictures, but horrible racing. IMSA tried and tried to restart the race in the rain and every single time it did not end well. The in-car video of the different crashes was horrific. It was sheer luck that the race did not have any injuries. The track just could not handle rain  the road part of the course turned into standing water – lakes nearly  ever driving through a puddle and hydroplaned? Try it at 100+ mph. Daytona better work on their drainage.

Onto the cars! Our INDYCAR drivers, as a whole, did not disappoint! The Penske Acuras (with both Alexander Rossi and Simon Pagenaud) had a great race in the DPi class. They were, at many times, in the lead of the race, and gave a great race with the ultimate winner the Konaca car with Fernando Alonso. The whole DPi class provided a thrilling race to watch. Leaders were challenged. They fought the whole race, and that ending move just shows that sometimes it comes down to one small moment in a race.

Unfortunately, the race ended early for Simon. The #6 found itself with a broken oil pump that was unable to be fixed before the race ended. They did come in 8th overall. The #7 Acura also had a fantastic race and ended up 3rd overall. I think Rossi did well for his first time in an endurance race, his stints in the car were full of (as usual) passing magic. Plus he was Penske’s 100th different driver, which is cool when you remember he won the 100th running. Juncos Racing also ran in the DPi class and finished their very first Rolex 24. This was the team that didn’t quit. They started the race with throttle issues, which forced them to pit before the green flag. Then later the car just ran out of power, but they fixed it and kept going. The team finished thirtieth overall. I anticipate a better showing from this team at Sebring. They really take lessons to heart. 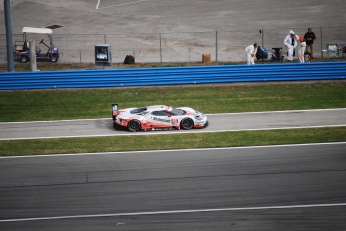 Two INDYCAR drivers, and an INDYCAR team, didn’t have the greatest race. The Chip Ganassi Racing (with Ford) just had a bucket of bad luck. Dixon’s car started the race with front-end damage, and then while in the lead, pitted just before the race was red flagged. They never had the opportunity to get back in the lead and ended in fourth place. The car technically finished in third, but a pit violation made them lose a spot. Bourdais car didn’t fare any better. They were running P7 before the rain and got collected in one of the many green flag restart incidents. They ended up in twenty-eighth place.

The all-female #57 had a race. They were Top 10 and approaching the Top 5 at times during the race. However, the rain stepped in and the car got damaged during one of the restarts. The team ended the race in 13th place.

We survived the race as well. It was a long twenty-four hours (which for me it was ultimately thirty-six hours as I was up at 7a on Saturday and didn’t get to sleep till about 7p on Sunday). The rain tried to dampen our spirits, but we didn’t let it happen. It’s just always a magical race. There are night practice and cars at night all lit up. We jumped on the Ferris wheel this time, hit the garage at 2am, and of course spent time with our favorite camping buddies. It’s a fitting race to start the season, and it’s just making me ready to head to St. Petersburg. #IsItMarchYet